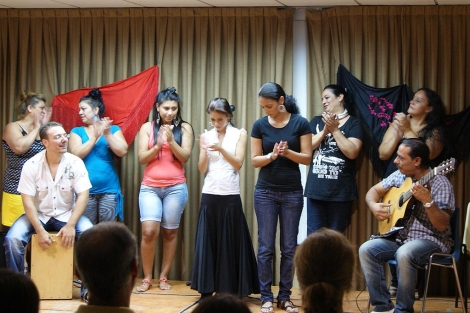 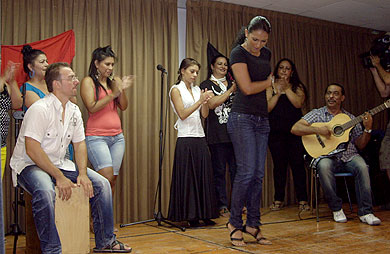 Hola Foro, fellow flamenco guitarist and first post here. I was just doing a search for Carlos to see if maybe he had recorded anything recently and came across this thread about him passing on recently. What a shock. I knew Carlos, have seen him perform numerous times over the years and would see him frequently when I was living in Sevilla. He has always been a tremendous inspiration to me.

I’m wondering if anybody knows what happened? He was fairly young. Oftentimes when someone known in the Flamenco community passes on you will find some article or other resource that mentions it, but I can’t find anything other than this thread.

That would be great if there was another solo guitar recording. He also accompanies Luis Agujetas on the disc “El Turista Soy Yo”, which is another really good recording. Some versions of that disc also came with a 30min DVD which mostly focuses on Luis and his story but there are some sections with the two of them performing live, and two short interviews with Carlos where he talks about the 3 mil viviendas, his open mindedness to other forms of music and the importance of listening to other musicians and other instruments.

First time I saw Carlos was around 2000 when he would occasionally play at the Carbonería in Sevilla, I’ll never forget those shows. If you’ve been there you know that there is no sound system and how obnoxiously loud the weekend crowds can be, sometimes unless you were right up front you could barely hear the music. They had copies of his Gypsy Flamenco disc behind the bar so I bought one…and what music, crackling with live energy, still one of my favorite discs. Not like a lot of the overly polished, produced recordings by people more concerned about making a career than about making real music that you hear coming out today.

I asked Carlos about the recording years later and if I recall correctly he said they had recorded it in a church or cathedral. I read that Chesky recorded occasionally in St. Paul the Apostle Church in Manhattan, maybe it was there?

What I’ve always loved about Carlos is that he had a very unique style, I can’t really think of anyone to compare him to. A lot of times players have a certain sound to them, usually associated with the history of their barrio or family: toque de Morón, de Jerez, de Granada, Caño Roto even… all different schools of toque or cante, but Carlos just had his own thing. To me he always sounded puro at heart but with something modern mixed in. Above all though there was this unique soniquete, a groove, almost funky. His tangos always had that. And his bulerías, like “Las Tres Mil” or “Chachipen” on the gypsy flamenco recording – intense and driving but then the falsetas would have these melodies that were like his guitar was dreaming that it was a cantaor. Same thing with his Tarantos and Mineras, like his guitar was singing…

I totally agree with you about the chesky ‘gypsy flamenco ‘ recording
It remains a great recording in terms of the energy and ‘live’ feel
Recently got into a discussion on another forum with someone who felt Carlos was ‘hard done by ‘ with that release
In terms of the production at that time
When many guitarists we’re going for a produced sound aimed at a commercial market
The ‘ live and room ‘ feel of the disc fell short of what was happening at that time
Which in turn deprived Carlos of the ‘commercial ‘ viability of his work – to me nothing wrong with tracking the palmeros, cante and guitar without track or room seperation – contrary – it adds something vital and missing in many of the modern productions
like you I think it gave the release a unique insight into his playing and composition – keeping things ‘real ‘ and adopting old school recording and production methods …

Never met or saw Carlos though several of my peers spent many months with him taking lessons ..

As much as I love the disc I too feel that the production was not the best. In a way it is somewhat like an audience bootleg rather than a commercial disc. Always kind of wished I could have remixed it and eq’ed it better…for one thing Fermin’s vocals (which I love) a lot of times are just too low in the mix. Maybe it is just the way that they recorded it didn’t give them much flexibility afterwards.

Still the music is so good. That is just me though, if given a choice I would prefer to listen to “Gypsy Flamenco” or crackly live afterhours bootleg recordings of Diego del Gastor then to the latest super smooth Diego el Cigala with special guest artists recording. The same way like seeing Carlos in la Carbonería packed with noisy foreigners paying little to no attention to the music was still a better show than countless other theater concerts I’ve been to.

Anyways, if you like “Gypsy Flamenco” you should definitely check out “El Turista Soy Yo”, if you haven’t already.

I have a funny story about the day I first met Carlos. At the time Carlos was building guitars, I was living in the Macarena and he would come by to visit this couple who were staying in the ground floor of the flat I was living in to show them some of the new guitars he was building in hopes that maybe they would be interested to buy one. The woman knew I was a big fan of Carlos and one day brought him up to meet me.

Meeting him was the greatest. I told him how much I loved his work, Sevilla, etc. and also mentioned that I’d stolen some of his falsetas from his Alegrías on the gypsy flamenco recording and transposed them to a different key so that I could play them when accompanying a singer I occasionally worked with who sang in E major. I told him I didn’t mean any offence by stealing the falsetas and that I hoped it was okay with him. He said he didn’t mind, and my guess is it was probably flattering in a way that people learning flamenco (albeit guiri beginners like myself) were inspired by what he had done. Of course he wanted to hear me play his stuff.

I remember playing the music for him and afterwards he had this somewhat confused look on his face and he asked me “las falsetas eran Mías?” “those were my falsetas?”.

What happened I think is that a significant amount of detail had been lost first in my humble attempts to learn pretty difficult and brisk falsetas by ear from the recordings (which if any of you have ever done you know it’s a lot of work, unless you have one of those devices which slows the music down without altering the pitch, which I don’t.) On top of that, those already slightly inaccurate falsetas were then transposed to a different key. And with the guitar, almost always there are changes that have to be made for falsetas to work in keys other than that which they were written.

So that is my funny story.

I’ve got my hopes up that more people who knew Carlos will eventually chime in. Frankly, I’m still in a bit of shock that he passed on, probably a lot of people who knew him but who aren’t in Spain haven’t heard yet.

A ways back I was talking to a good cantaor friend of mine in Sevilla about Carlos once over drinks and he told me he thought Carlos was “un genio”, a genius. And then one day with Carlos we were talking about guitarists and I asked him about el Niño Miguel (who is one of my favorite guitarists ever) and he said el Niño Miguel was a genius. I thought that was great. Carlos’ appreciation for el Niño Miguel didn’t really suprise me, the two of them are similar in some ways.

Carlos has stated in interviews the importance of listening to all types of instruments and musicians and listening to him you can hear the realization of that open mindedness. I’ve always wondered though, who did Carlos learn from? Who were his main influences, does anybody know?

A lot of times you can see a direct connection with players to other players in their barrio or in their family. But if you look at the 3 Mil Viviendas, the guitarists that come to my mind are Martín del Revuelo and Emilio Caracafé (I know there are more but those two I’ve heard the most of.) Both of them, tremendous guitarists, but like Carlos each with really unique styles quite different from one another…

Here is an interesting story: I remember finding on youtube years ago a low quality audio only recording called something vague like “Vareta en Cordoba” and it was a bulería with just cante and guitar. No mention of who the guitarist was. The clip cut in midway through one of the guitarists falsetas and it sounded a lot like Carlos to me, but not quite. Real strong playing like Carlos, a similar sense of tension in the playing, but the falsetas were predominately pulgar and index finger style. Also, I didn’t recognize any of the falsetas. Years later, in the Peña Torres Macarena, a young cantaor came and accompanying him was Martín Revuelo, and as soon as he started to play I recognized him right away as the guy on that recording, he even played some of the same falsetas. Now when I hear them it is very easy to tell the difference in their styles, but for a while I listened to that recording and wondered, could this be Carlos?

On the topic of the 3 Mil, did anybody else ever wonder why Carlos wasn’t in the film “Polígono Sur”?

Thanks for the nice stories guys!
I met Carlos a few years back in “la Carboneria” in Sevilla. Nice guy.