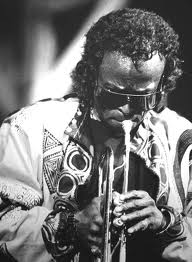 Miles Davis speaks on the subject of classical musicians and the recording of Sketches of Spain.

“…first, he (Gil Evans) had to reorchestrate the whole song because he had the music score and musical parts for all the voices so tight and fucking close. He had it exactly how everything was, musically speaking, so if somebody would just breathe, he would have that in there, too. Gil had like micro-beats in the score. It was so tight that one of the trumpet players–a favorite white trumpet player of mine named Bernie Glow–turned all red while he was trying to play this Mexican melody. He told me later that was the hardest passage that he ever had to play. I told Gil to write another arrangement, but he didn’t feel that anything was wrong with this one and couldn’t understand why Bernie was finding it so hard to play this arrangement.
Now, Gil was the type of guy who would spend two weeks writing eight bars of music perfectly. He’d go over it and over it and over it. Then he’d come back to it again and again and again. A lot of times I had to be standing over him and just take the shit from him because he’d be so long in making up his mind about putting some music in or taking some out. He was a perfectionist.

So after Bernie turned purple like that, I just went to Gil and told him, “Gil, you don’t have to write that music like that. It’s too close for the musicians to play. You don’t have to make the trumpet player sound like they’re perfect, because these trumpet players are classically trained and they don’t like to miss no notes no how.” So he agreed with that. In the beginning, we had the wrong trumpet players because we had those who were classically trained. But that was a problem. We had to tell them not to play exactly like it was on the score. They started looking at us–at Gil, mostly–like we were crazy. They couldn’t improvise their way out of a paper bag. So they were looking at Gil like, “What the fuck is he talking about? This is a concerto right?" So they know we must be crazy talking about "play what isn’t there." We just wanted them to feel it, and read and play it, but these first ones couldn’t do that, so we had to change trumpet players, and that’s why Gil had to reorchestrate the score. Next we got some trumpet players who were both classical and could feel. There were only a few parts; it was like a marching band. And so after we changed trumpets and reorchestrated for them–and Bernie still turned purple, but he and Ernie Royal and Taft Jordan and Louis Mucci played their asses off–everything went all right. I played both trumpet and fluegelhorn on this album.

Then we had to have some drummers who could get the sound that I wanted; I wanted the snare drum to sound lilke paper tearing, those little tight rolls. I had heard that sound way back in St. Louis at the Veiled Prophet Parades with those marching legit drummers they had back there. They sounded like Scottish bands. But they’re African rhythms, because that’s where the bagpipes come from, too, Africa.

That meant we had to get a chorus of legit drummers to play in the background behind Jimmy Cobb on drums and Elvin Jones on percussion. We had that kind of sound from the drummers, the legit drummers, and we had Jimmy and Elvin to play the stuff they normally play, solo and shit. Legit drummers can’t solo because they have no musical imagination to improvise. Like most other classical players, they play only what you put in front of them. That’s what classical music is; the musicians only play what’s there and nothing else. They can remember, and have the ability of robots. In classical music, if one musician isn’t like the other, isn’t all the way a robot, like all the rest, then the other robots make fun of him or her, especially if they’re black. That’s all that is, that’s all the classical music is in terms of the musicians who play it–robot shit. And people celebrate them like they’re great. Now, there’s some great classical music by great classical composers–and there’s some great players up in there, but they have to become soloists–but it’s still robot playing and most of them know it deep down, though they wouldn’t admit it in public…” 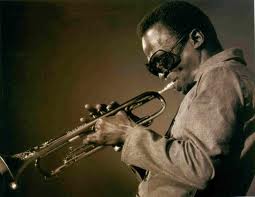