Stéphane Mallarmé Poems and Poetry. The Afternoon of a Faun translated into English.

The Afternoon of a Faun – by Stéphane Mallarmé

These nymphs, I would make them endure.

Their delicate flesh-tint so clear,
it hovers yet upon the air
heavy with foliage of sleep.

Was it a dream I loved? My doubt,
hoarded of old night, culminates
in many a subtle branch, that stayed
the very forest’s self and proves
alas! that I alone proposed
the ideal failing of the rose
as triumph of my own. Think now . . .
and if the women whom you gloze
picture a wish of your fabled senses!
Faun, the illusion takes escape
from blue cold eyes, like a spring in tears,
of the purer one; and would you say
of her, the other, made of sighs,
that she contrasts, like the day breeze
warmly astir now in your fleece!
No! through the moveless, half alive
languor that suffocates in heat
freshness of morning, if it strive,
no water sounds save what is poured
upon the grove sparged with accords
by this my flute; and the sole wind
prompt from twin pipes to be exhaled
before dispersal of the sound
in arid shower without rain
is-on the unwrinkled, unstirred
horizon-calm and clear to the eye,
the artificial breath of in-
spiration, which regains the sky.

Sicilian shores of a calm marsh,
despoiled by my vanity
that vies with suns, tacit beneath
the flower-sparkle, now RELATE
how here I cut the hollow reeds
that talent tames; when, on pale gold
of distant greens that dedicate
their vine to fountains, undulates
an animal whiteness in repose:
and how at sound of slow prelude
with which the pipes first come to life
this flight of swans, no! naiads flees
or plunges . . .

Limp in the tawny hour
all is burning and shows no trace
by what art those too many brides
longed-for by him who seeks the A
all at once decamped; then shall I wake
to the primal fire, alone and straight,
beneath an ancient surge of light,
and one of all of you lilies!
by strength of my simplicity.

Other than the soft nothingness
their lips made rumor of, the kiss,
which gives assurance in low tones
of the two perfidious ones,
my breast, immaculate of proof,
attests an enigmatic bite,
imputed to some august tooth;
leave it! such mystery made choice
of confident: the vast twinned reed-
beneath blue sky we give it voice:
diverting to itself the cheek’s
turmoil, it dreams, in a long solo,
that we amused the beauty here-
about by false bewilderments
between it and our naive song;
dreams that from the usual dream
of back or flawless flank traced by
my shattered glances, it makes fade,
tempered to love’s own pitch, a vain,
monotonous, sonorous line.

Oh instrument of flights, try then,
cunning Syrinx, to bloom again
by lakes where you await me! I,
proud of my murmur, shall discourse
at length of goddesses; and by
idolatries warmly portrayed
remove more cinctures from their shades:
thus, when from grapes their clarity
I suck, to banish a regret
deflected by my strategy,
laughing, I raise the cluster high
and empty to the summer sky,
and breathing into its bright skins,
carving the grace of drunkenness.
I gaze them through till night begins.

Oh nymphs, let us once more expand
various MEMORIES. My eye,
piercing the reeds, darted at each
immortal neck-and-shyoulders, which
submerged its burning in the wave
with a cry of rage to the forest sky;
and the splendid shower of their hair
in shimmering limpidities,
oh jewels, vanishes! I run;
when, at my feet, all interlaced
(bruised by the languor which they taste
of this sickness of being two),
I come upon them where they sleep
amid their own chance arms alone;
and seizing them, together still
entwined, I fly to this massed bloom-
detested by the frivolous shade-
of roses draining all perfume
in the sun’s heat; where our frisk play
many mirror the consumed day.

I worship you, oh wrath of virgins,
savage joy of the sacred burden
sliding its nakedness to flee
my lips that drink, all fiery-
like tremor of a lightning-flash!-
the secret terror of the flesh:
from feet of the inhuman one
to her shy sister’s heart, who is
forsaken at the instant by
an innocence, moist with wild tears
or humors of a brighter cheer.
My crime is, that in gaiety
of vanquishing these traitor fears
I parted the disheveled tuft
of kisses which the gods had kept
so closely mingled; for I scarce
moved to conceal a burning laugh
beneath glad sinuosities
of one alone (holding the child,
naive and never blushing, by
a single finger, that her white-
swan candor might take tinge of shame
from kindling of her sister’s flame):
when from my arms, that are undone
by obscure passings, this my prey
forever thyankless slips away
unpitying the sob which still
intoxicated me.

Ah well!
Others will draw me towards joy,
their tresses knotted to my brow’s
twin horns: you know, my passion, how
each pomegranate, purple now
and fully ripened, bursts-and hums
with bees; and out blood, taking fire
from her who will possess it, flows
for the timeless swarm of all desire.
At the hour when this wood is tinged
with ash and gold, a festival
flares up in the extinguished leaves:
Etna! ’tis on your slopes, visited
by Venus setting down her heels
artless upon your lava, when
a solemn slumber thunders, or
the flame expires.      I hold the queen!

But no,
the spirit empty of words, and
this weighed-down body late succumb
to the proud silence of midday;
no more-lying on the parched sand,
forgetful of the blasphemy,
I must sleep, in my chosen way,
wide-mouthed to the wine-fostering sun!

Couple, farewell; I soon shall see
the shade wherein you merged as one. 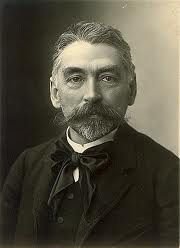